Diane's Fight for Her Life

Her Most Challenging Chapter

2011 was supposed to be the year I put myself first.

I had just celebrated my 60th birthday and had transitioned from a fast-paced career in broadcasting to a more relaxed job in university administration close to my home on Long Island. I was excited to spend the coming years taking a well-deserved step back from long hours and begin traveling the world. But little did I know that the most challenging chapter in my existence was about to begin: the fight for my life.

I have always been an active person. One morning when I was stretching, I noticed that my ankles were swollen. I attributed it to something I had eaten, but when the swelling kept returning, I started to worry. 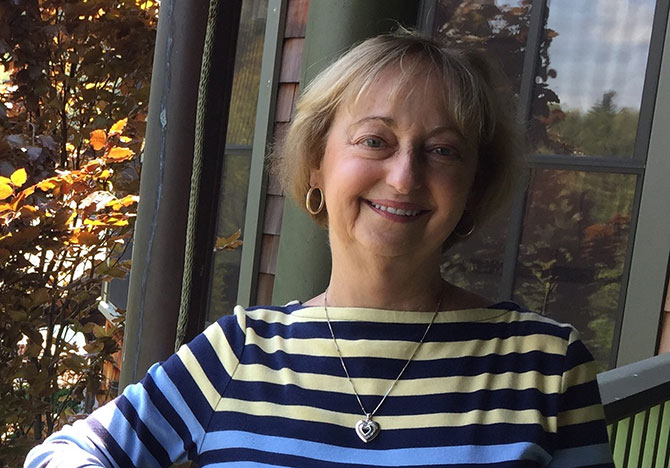 I mentioned the swelling to my local doctor, who did some tests and assured me that there was probably nothing to worry about. When the results came back my doctor was mystified. "There must be a lab error," he said as he sent my bloodwork to a second lab. "Your bloodwork is off the charts." When the initial results were confirmed, he referred me to a nephrologist who promptly scheduled a kidney biopsy.

I was confused, and nervous. When I heard the word "biopsy" my first thought was cancer! After several months of tests, I was diagnosed not with cancer, but amyloidosis, a rare disease resulting from a buildup of abnormal proteins, produced in the bone marrow, that were affecting my kidneys. I looked up the term and was shocked to see that I could be dead in two years. I knew right then and there I would not stop fighting until I beat this disease.

Choosing Memorial Sloan Kettering (MSK) for my treatment was easy – I knew it had a wonderful reputation not only for cancer, but also for related diseases such as mine. I felt instantly at ease after meeting MSK hematologic-oncologist Heather J. Landau, MD, in the fall of 2011. Dr. Landau enrolled me in a clinical trial that provided three months of chemotherapy followed by a stem cell transplant.

Following chemotherapy, I spent five weeks at MSK for the transplant, and, let me tell you, it was no walk in the park. The compassion my team had for me was inspiring. Even on the most difficult days, they never lost their patience. My doctors and nurses needed to shut down my immune system, a risky procedure, to prepare me for the stem cell transplant. While those weeks were some of the toughest of my life, my team ensured I never lost faith.

I had hoped that, after the successful stem cell transplant, I would be in the clear; but that summer I was sent back to MSK with kidney failure. I had a choice: a kidney transplant or life on dialysis. To make matters worse, I have a rare blood type, which would make my chances of finding an organ donor match more difficult. This was devastating – I had trips lined up and friends to visit. Over the next few years, I got on as many hospital transplant lists as I could, and began dialysis.

Living Life to the Fullest

I remained on dialysis for five years. In that time, I made it my mission to keep traveling and live as normal a life as possible. In fact, I scheduled dialysis appointments at my travel destinations across the country. I must have broken a record for most dialysis clinics visited!

In 2017, just as I was starting to give up hope, I was approved for a kidney transplant at a local hospital. Fortunately, the surgery was smooth sailing. I have been healthy and dialysis-free ever since.

In the years since my amyloidosis diagnosis, I have become committed to sharing my story of perseverance. At the suggestion of Dr. Landau, I speak to a support group for people with amyloidosis. My MSK team went above and beyond to support me, and I hope to provide the same inspiration to future generations of patients and families affected by my disease.

The Power of Giving

When I look up amyloidosis now, I can see that care is improving since my original diagnosis. MSK research over the past decade, including leading-edge clinical trials, is providing exciting new treatment options for people with my disease. That is why I am a member of the Friends of MSK monthly giving program, and why I have included MSK in my estate plans.

The gift in my will embodies my goal to leave a positive mark on the world for those who come after me. I was, and continue to be, a lucky recipient of treatments funded by the generosity of past supporters. My greatest wish is that my contributions play a part in saving more lives for generations to come.

Join Diane in Making a Difference

You can join Diane in making a gift to Memorial Sloan Kettering to impact the lives of people with cancer and their families. Contact the Office of Planned Giving plannedgiving@mskcc.org or 800-688-1827 to learn more about your options.